6 car marques with big birthdays in 2019 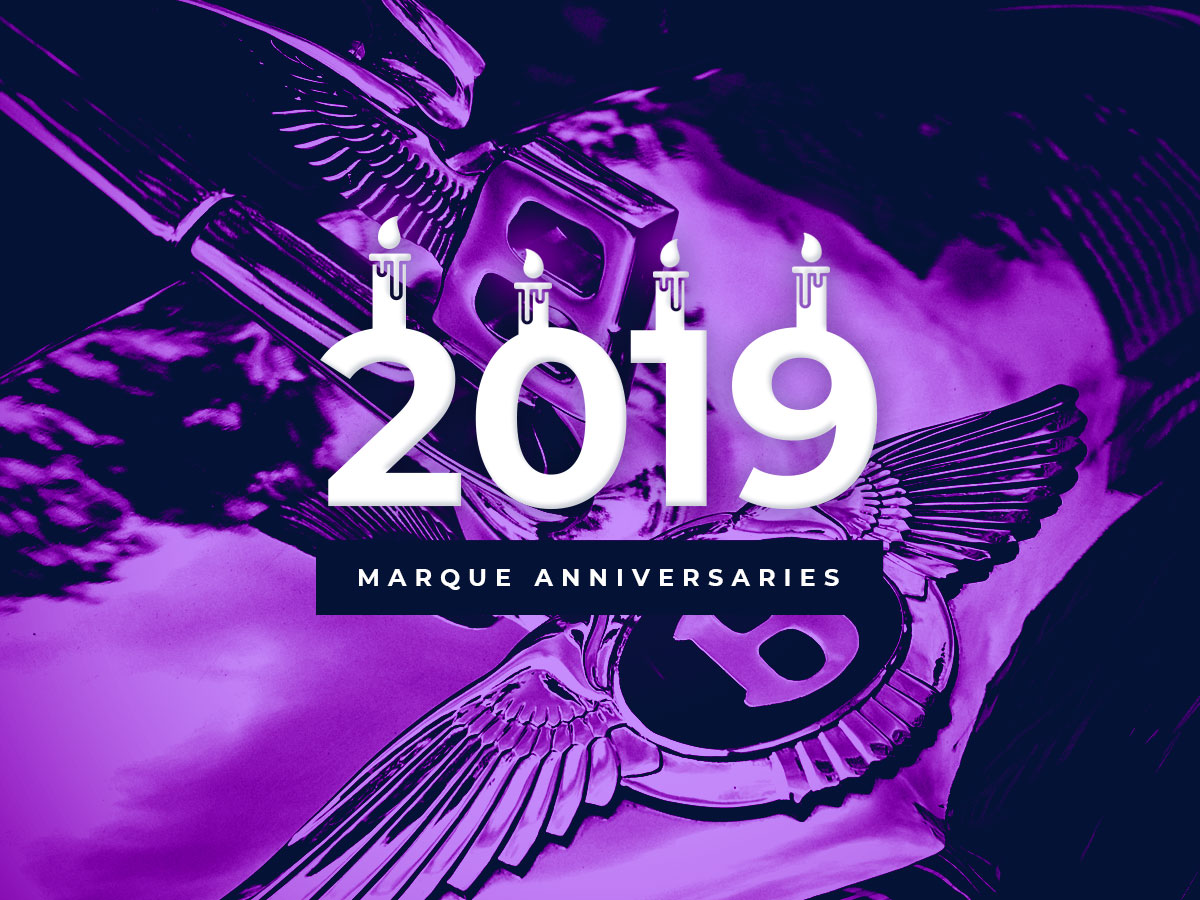 2019 has ‘marqued’ a few special milestones for some of our most cherished vehicle manufactures. Sometimes its easy to forget that these well-known marques produced many of todays most loved classic cars.

This iconic Italian marque celebrated a landmark 120th anniversary in 2019. Founded in Turin in 1899, the red-badged marque has given the world many popular models – from the Fiat 500 and the championship winning Fiat 124 Rallye Spyder, to the 28.5 litre Beast of Turin. Fiat has also had a few starring roles over the years. The Topolino featured in the 1948 film Roman Holiday and the 500 characterised in the animation film Cars as tyre changing “Luigi”.

Also celebrating 120 years, this French staple was founded by three brothers in 1899. Since the mid-60’s, the marque has been known for producing family cars and hot hatches. The cult Renault 5 was one of the first retro hot hatches, with the popular Renault Clio hot on its tail. The marque is also well known for their motorsport successes in F1 and rallying with their host of Alpine-tuned machines.

Morgan Motor Company was born in 1909 when founder, Henry Frederick Stanley Morgan, decided to make his own cars in the town of Malvern. Starting with a prototype three-wheeler named the Runabout, Morgan went on to produce their first four-wheel car in 1936 which is still in production today. Morgan has produced many sports cars and competition winning vehicles over the years and have been blessed with 110 years of manufacturing high quality, hand-built sports cars that are still desired today.

2019 is a year for centenary’s too and one marque celebrating 100 years is Citroen. Founded in in 1919 by André-Gustave Citroën, this iconic French name has produced many well-known vehicles over the past 100 years. From the farmer-friendly Citroen 2VC and the Traction Avant, to the stylish DS and popular retro commercial H-Van.

This British marque was founded in 1919 by W.O. Bentley and his brother H.M. Bentley and are best known for producing fine motor cars that go fast! From the mighty 4½ Litre and Speed Six, to the Mulsanne and Continental GT, their philosophy, “to make a fast car, a good car, the best in its class”, underpinned the company’s success. Bentley is looking forward to the next chapter in their story by producing 12 continuation models of their famous 4½ Litre Bentley Blower racing models, one for each race that the original cars competed in the late 1920’s.

Founded in Bologna in 1949 by Carol Abarth, a passionate designer, test driver and racer who broke many records. The sports car and tuning firm, now owned by Fiat, prepared Fiat’s rally cars and had many hillclimb and motorsport successes. Abarth still specialise in building small but powerful cars with the potential to outperform larger vehicles – they even once declared that there is “a certain satisfaction in humiliating bigger and more expensive cars with a modest hatchback”.

Finally, we can’t celebrate these six anniversaries without giving a special mention to Armstrong-Siddeley. Founded in 1919, Armstrong Siddeley produced vehicles until 1960. Although no longer in production today, it is a treat to sport one of these vintage cars at a classic car show today.