From Oil to Airbrush The Story of Angelina Icon, a 1953 Ford Anglia

Home » From Oil to Airbrush The Story of Angelina Icon, a 1953 Ford Anglia 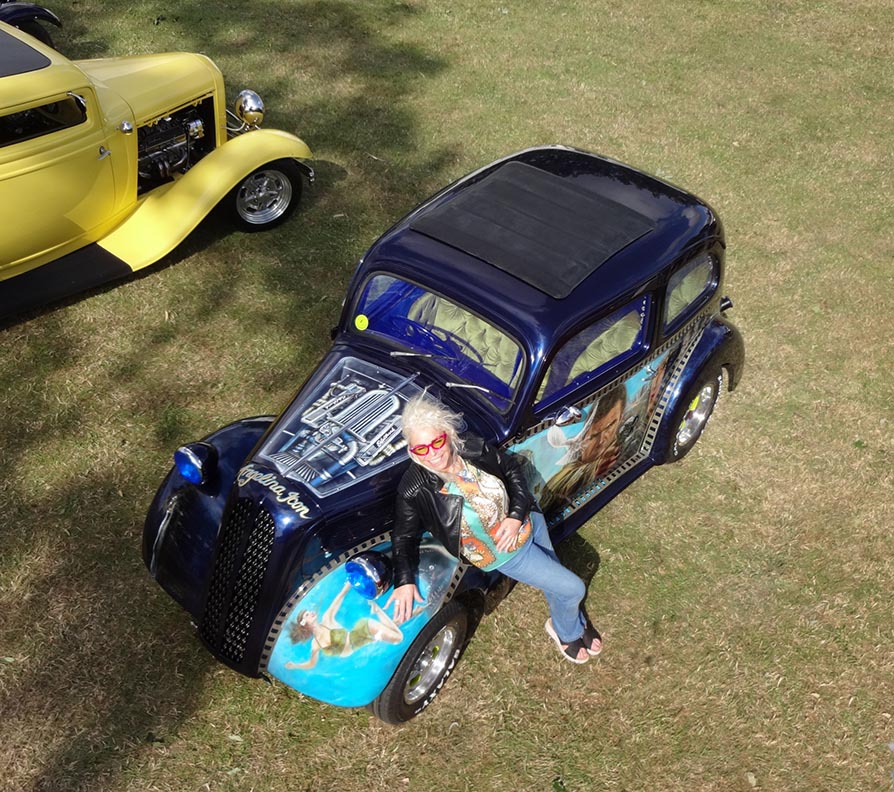 At the 2019 NSRA Hot Rod Supernationals, ClassicLine were delighted to choose a car and present the trophy to the winner of the Pop Festival. There were of course many great Pops, Anglia’s and Fordson’s at the show, but the 1953 Ford Anglia owned by Maxime Xavier really captured our attention. The car captures the essence of a custom car and the level of skill involved in the detailed airbrushing is second to none.

We caught up with Maxime to find out more…

Maxime, from Lyme Regis, is a professional artist and runs a working art gallery called Studio 19. As an artist since childhood, Maxime has appeared on TV, radio and in magazines. But, her biggest recognition to date is having an oil painting of Alan Turing recognised and catalogued by The National Portrait Gallery in London.

From oil to airbrush. It was chance that Maxime stumbled across an airbrush and compressor kit for sale at the 2017 NSRA Hot Rod Supernationals for £35. “The gentleman selling it said if I gave him a kiss, I could have it for £30 – win win situation I thought. I had fallen in love, with the airbrush of course!”, recalls Maxime.

Maxime’s passion for the custom car scene came through her partner, iconic custom car builder Andy Saunders. Andy has built many well-known cars over the years but in early 2019 Maxime decided she wanted to have her own special car.

The 1953 Ford Anglia was advertised on a ‘popular’ auction site in the style of a Rat Rod. “I showed Andy and he suggested how rust free it looked, and as it was already automatic, which I wanted, he suggested it was worth a shot”, says Maxime. The car was purchased mid-April 2019 from a seller just across the Devon boarder not far from Lyme Regis.

The car arrived in a lacquered, bare rusty steel manner complete with skull and cross bone stickers on the door, lengths of chain welded along the roof gutters and wheel arches. Plastic skulls even embellished the boot lid, rear wings and inside the grill shell. This was not quite the style that Maxime was desiring, so she spent a couple of weeks pondering a custom artwork look using her much loved airbrush kit.

Work began on the Anglia on the first May bank holiday. Andy began by removing the chains. Then widening the rear wings by 4 inches and seam welding them, as well as the front wings, to the body. He frenched the taillights and changed them to 1959 Plymouth Belvedere Wagon lights. Andy made a new grille surround to fit the twin Fiat 500 grill panels. He also made the hole in the roof wider and shorter to accept a Webasto Sunroof the couple found on the same auction site.

As is common on these small Fords, the boot and doors needed a new bottom edge as well. A frenched aerial finishes the boot surround whilst the front and rear have been nosed and decked. 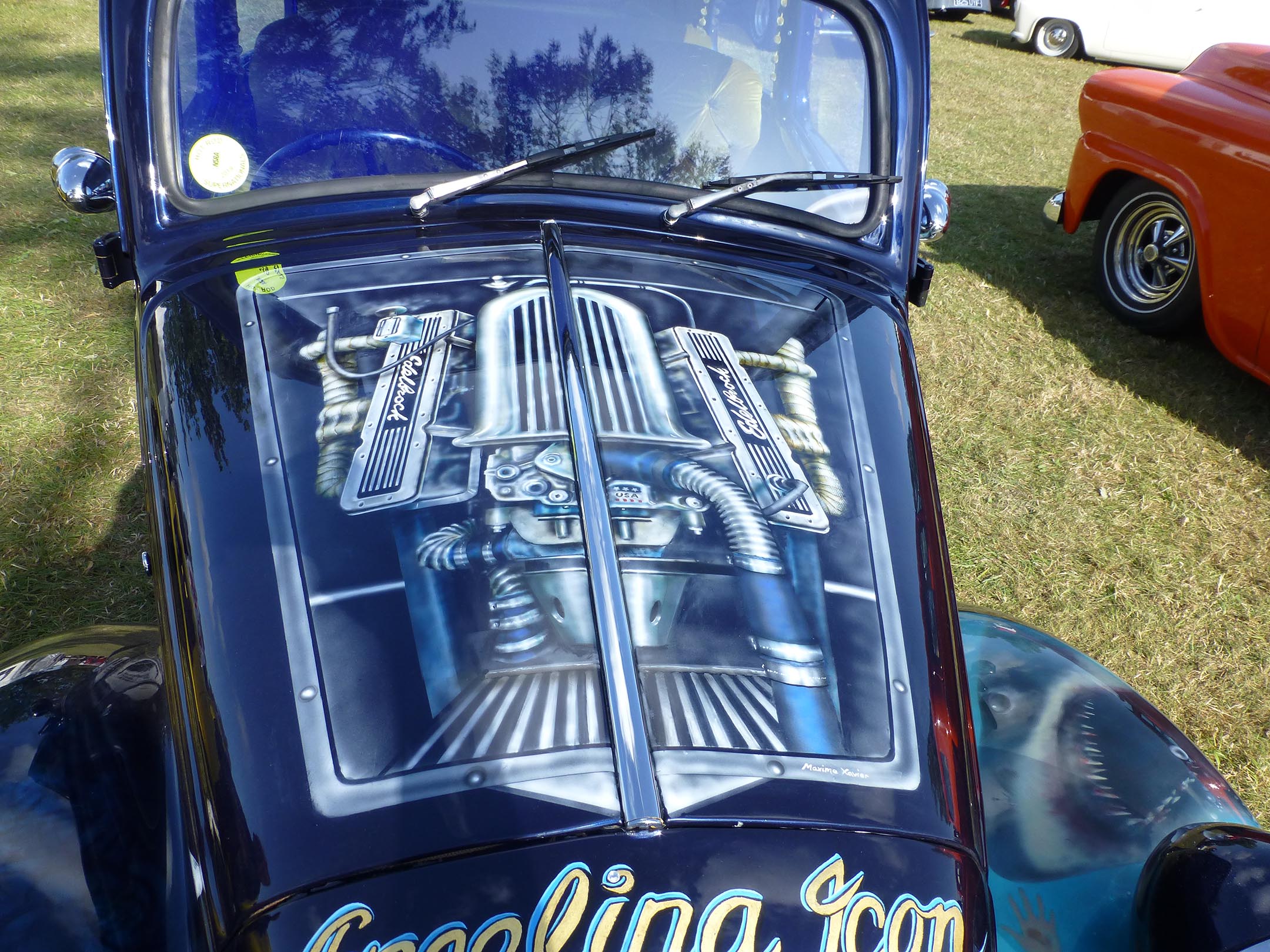 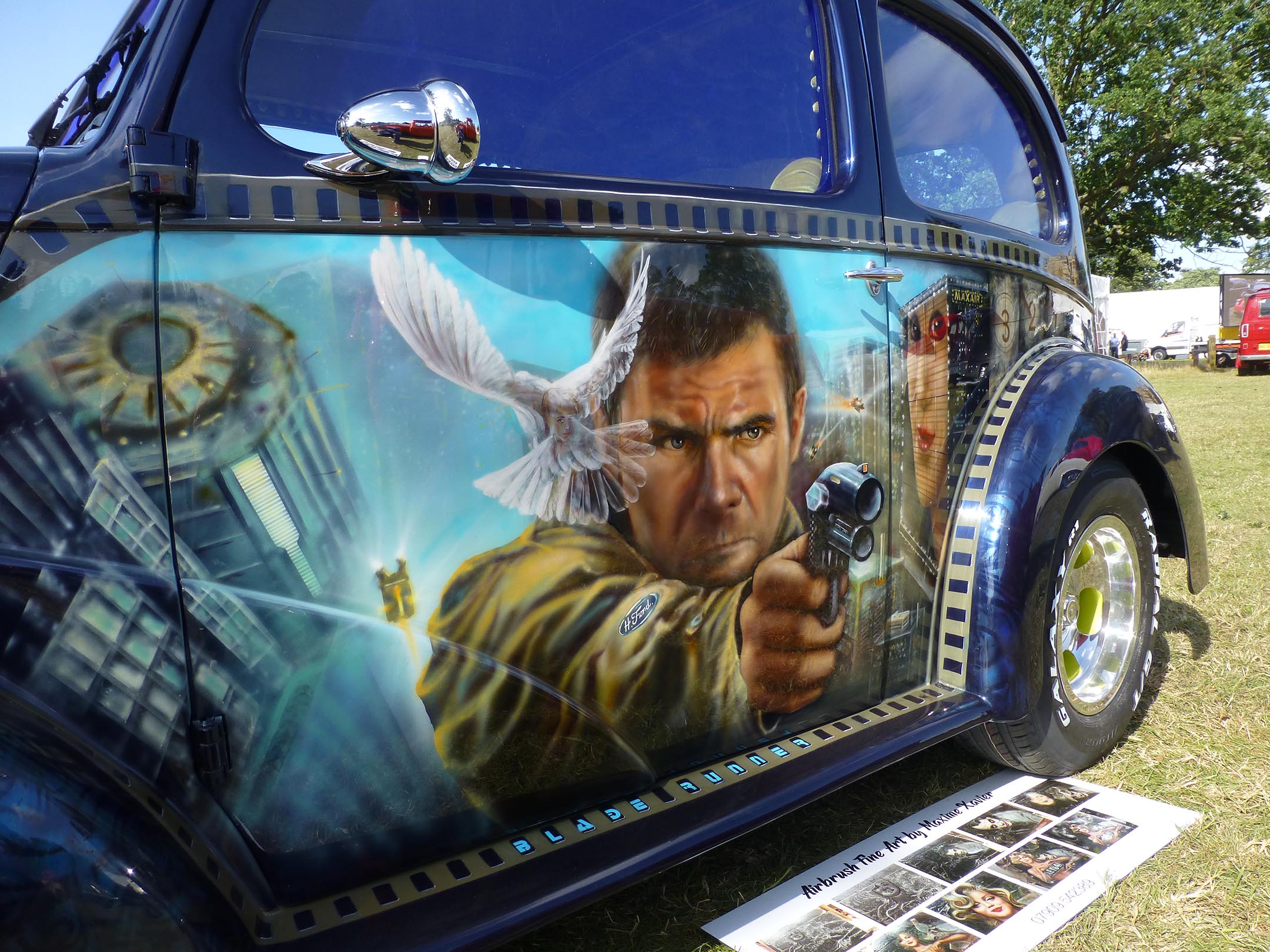 The Anglia is still running the engine that was in the car when it was purchased, a 1600 Pinto Straight 4 Slush Box. The rear axle is MKI Escort, whilst the suspension front and rear is stock, sitting on a set of Slot Mags. Andy sourced the Slot Mags which needed some restoration, they were then polished with the slots painted the same colour as the interior. Andy says, “the tyres came from North Hants Tyres who were very helpful indeed with their advice on sizes”.

Inside, the front seats are from a Ford Prefect – they are slightly wider than original Pop ones for comfort. Of course, there is a custom element, the seats have been made 9 inches taller for a regal thrown effect. The original Bakelite dash been maintained. The car is trimmed in pistachio with a buttoned chesterfield style – there’s event tassels finishing off the roof lining. Maxime and Andy would like to thank Keith Harding for his amazing trimming and interior services.

Andy then primed and base coated the entire car over the last May bank holiday weekend and topped it off with a clear coat to give Maxime her canvas. “He worked so hard to get it done as soon as possible as he knew I wanted to bring it to the NSRA Hot Rod Supernationals. It took him a month to do everything. Thank you my darling for all your hard work preparing such an unusual and fabulous canvas for me to work on”, says Maxime.

“My imagination is such that when I first saw her and realised her model was an Anglia, I immediately nicknamed her ‘Angelina’. Over the next few days I decided that would be part of her name and then the word ‘Icon’ was bartered around, and I liked it, so she officially became ‘Angelina Icon’. With this I decided to mural iconic people over her”, Maxime continues.

Maxime placed Black Beauty on the front wing illustrating her equine artistic skills. As well as a portrait of Ester Williams, a megastar in the 1950’s when the car was made, with Jaws chasing her on the other front wing to depicting a water effect. This is combined with a Chevy engine on the bonnet, Steve McQueen on one side and Harrison Ford on the other. On the back there is a collage of Marilyn, the Joker and Barbarella on the boot lid and round the rear corner – just about every area on the car is filled! “As you hunt around the car see if you can spot my dog, Diva, piloting a Star Wars Space craft!”, says Maxime. CL: Yes, we spotted Diva! 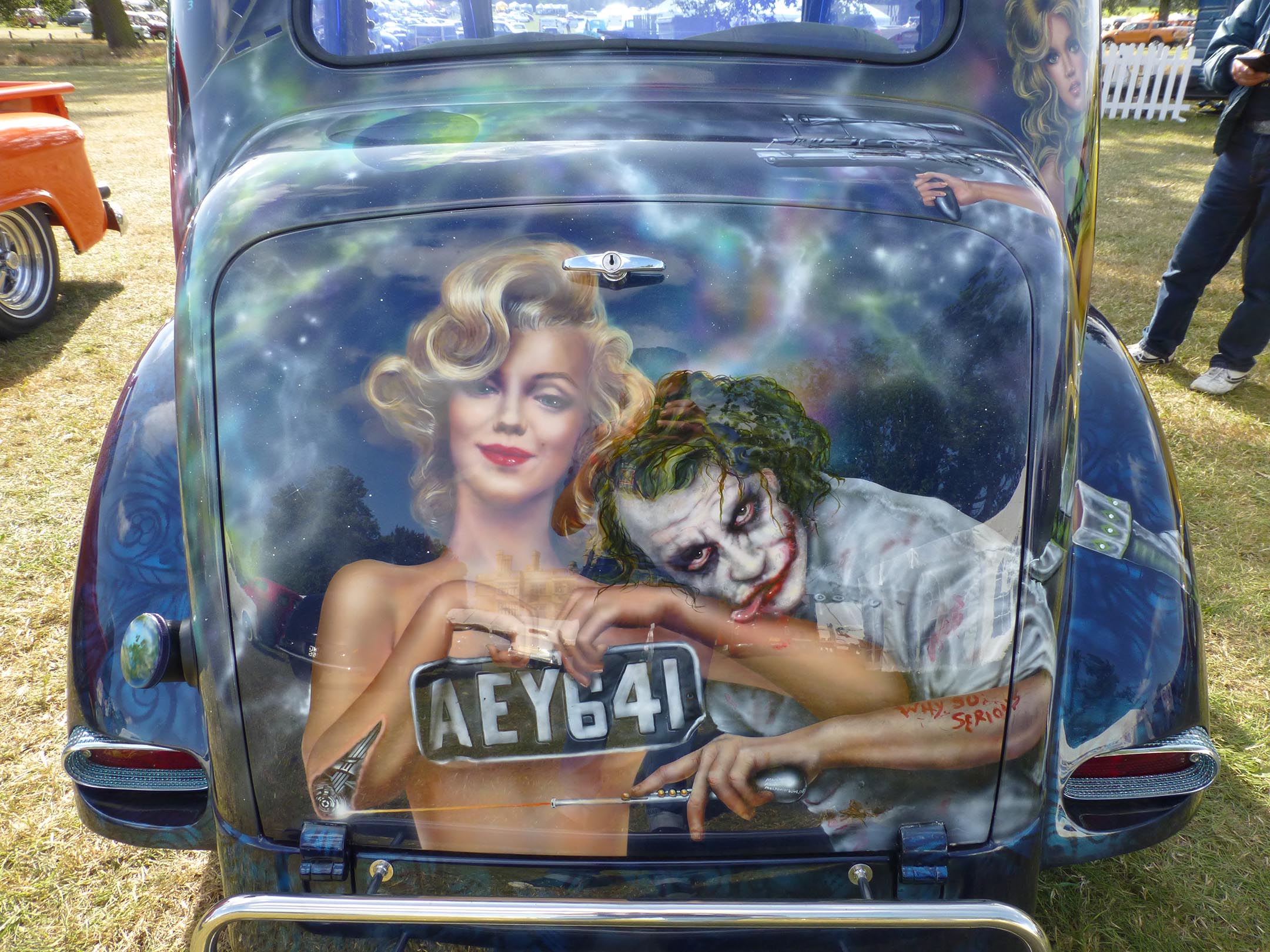 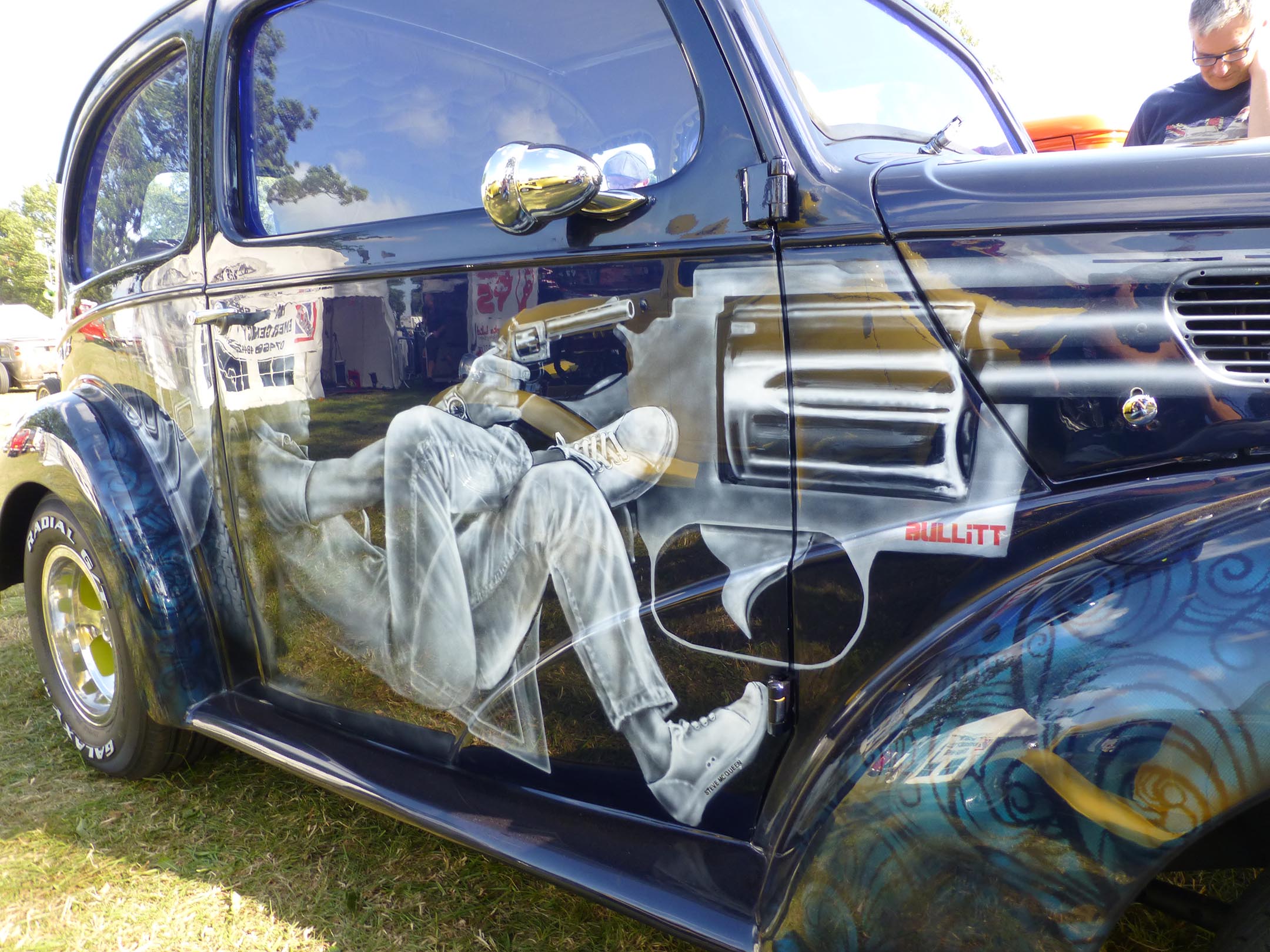 As a finishing touch, the fuel cap is airbrushed with plant Earth with a red dot to show Maxime’s home. Oh, and there’s a diamond encrusted Oscar over the gear stick too!

The Range Rover Oslo Blue Pearl base colour enables the airbrushing to fade into the base but also leap out of the background colour. Maxime would like to thank John Bethell for the amazing 3D top clear coat.

With such a unique project, there must be a lot of preparation. “As this was my car, the canvas was mine to do whatever I wanted with it which fuels my creativity. When I paint, brush or airbrush, a lot of the work is behind the scenes. I do an incredible amount of research before I even start to design the layout and working on this car was no exception. When I bought the car, my mind would not rest, thinking of things I could do, lay outs that would work. I probably put a month’s work into this before I even started painting – which worked well with Andy’s side of things. In fact, come to think of it Andy finished restoring the boot lid first so I could be working on it at the same time as he was working on the body work”, Maxime tells us.

Looking at the result, you wouldn’t believe that Maxime has only been airbrushing for the past year and a half. She already has the artistic flair, so it was a case of practising using an airbrush.

So, with a great looking car, Maxime is looking forward to cruising in her Angelina Icon – the next show the car is heading to is Kustom Kulture in Lincolnshire the last weekend of August. Her creative mind never rests, and who knows, airbrush commissions could be around the corner. News on the grapevine is that 70’s murals are coming back into vogue….

When you see this car next, see if you can spot the airbrushed dead fly and a hungry moth somewhere!

A Ford Pop to make your heartbeat 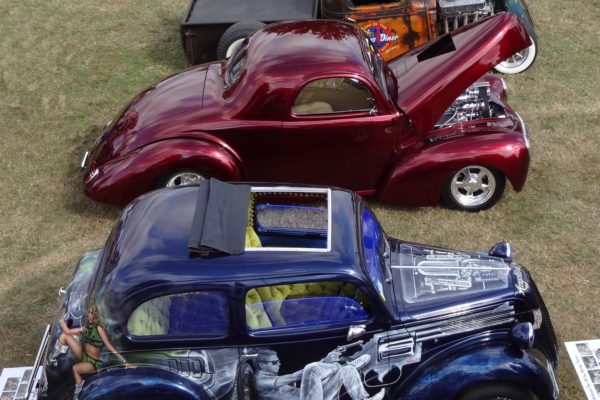 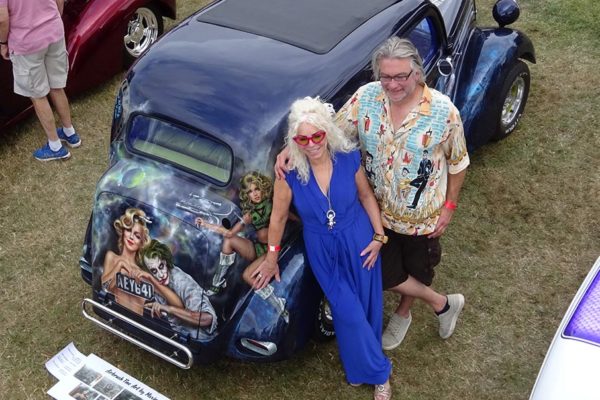 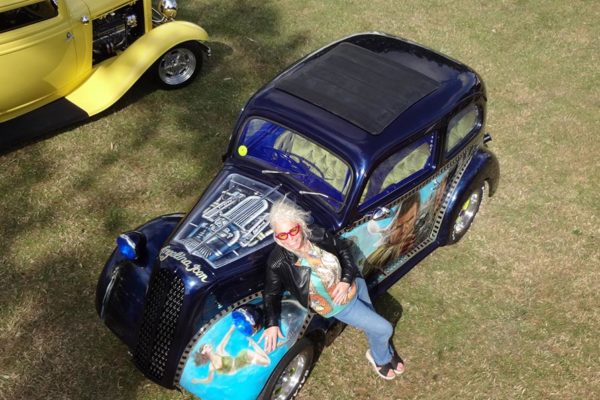 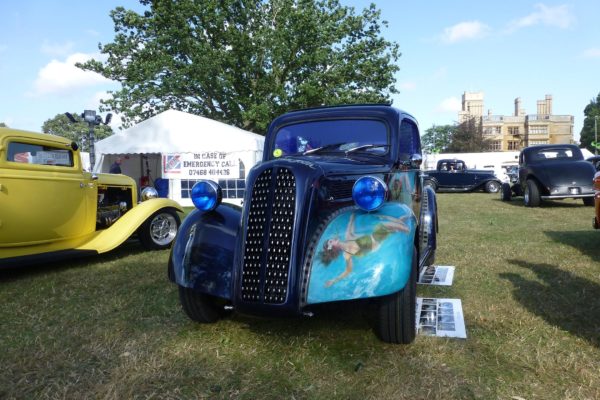 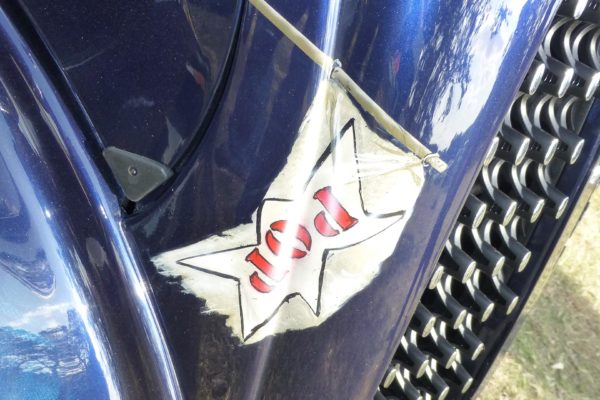 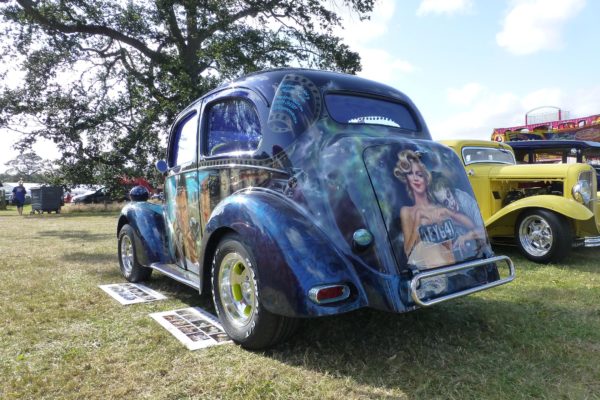 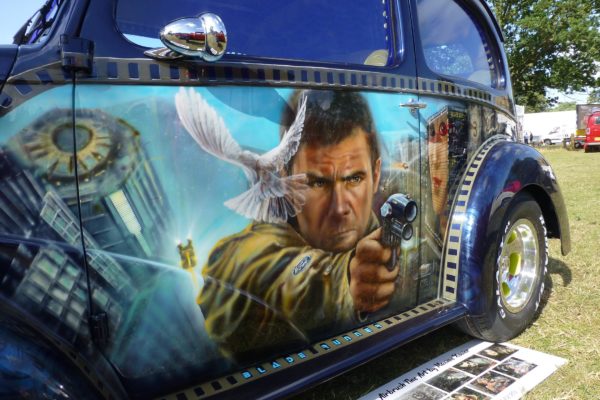 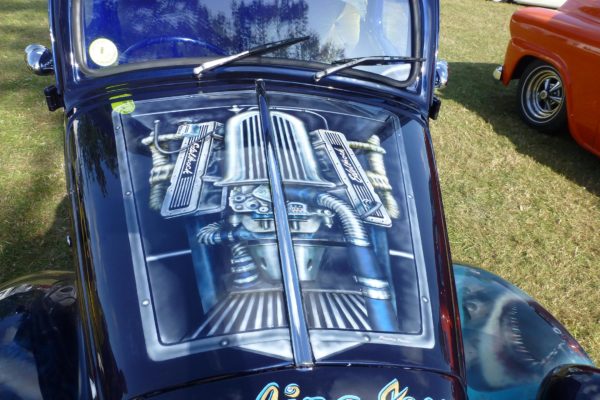 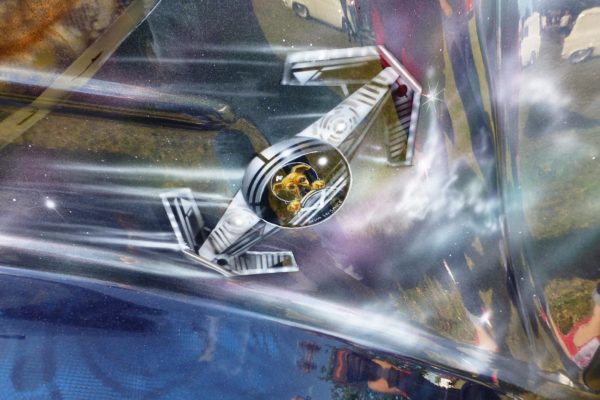 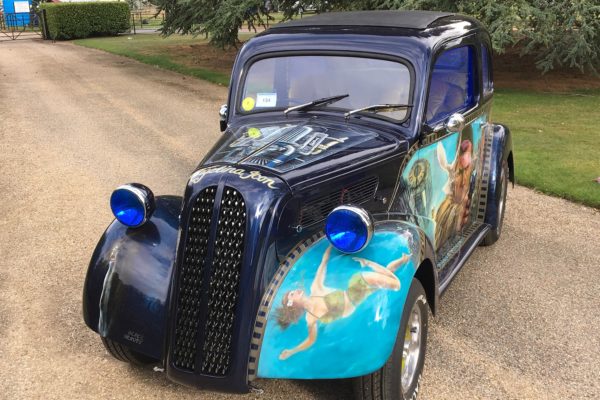 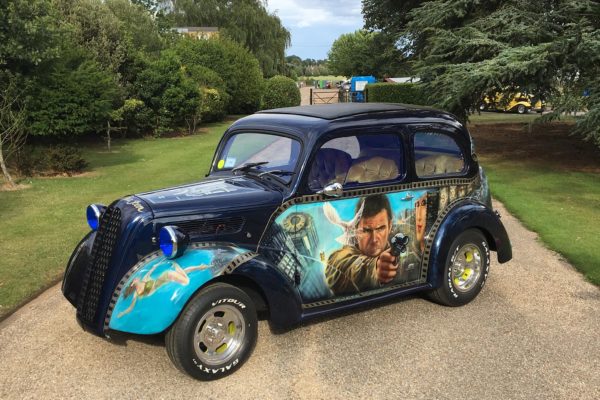 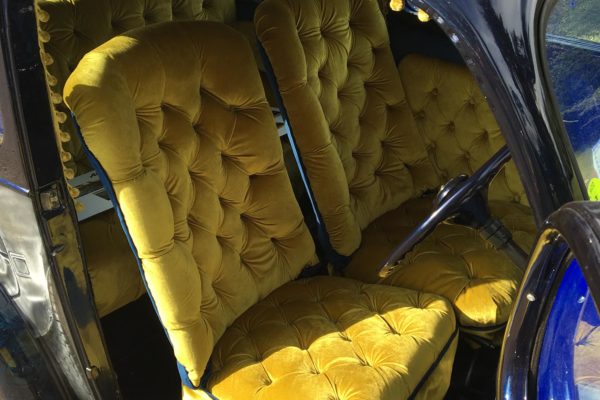 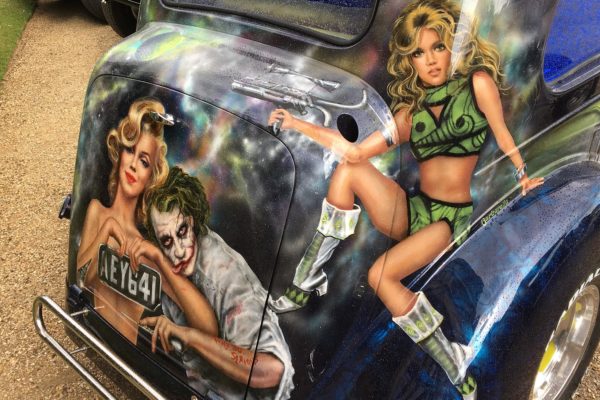 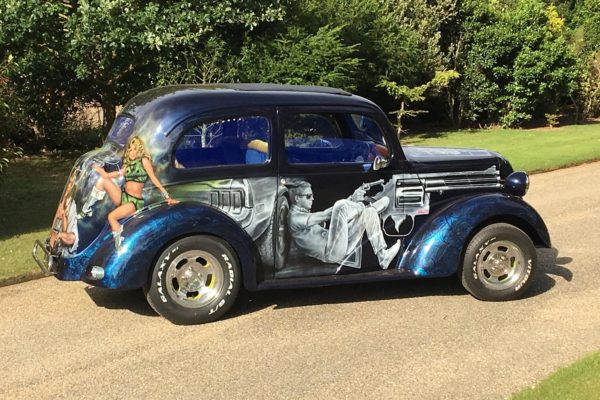