Do you remember back in the day paying your membership fee and weekly subs to the club Chairman as he sat in the pub with a leather briefcase, as members in turn went up to pay him their weekly 50p subscriptions?

We love hearing about stories like this through our club of the month feature Spotlight On. The rich history and culture that has set the scene that we all know and enjoy today.

2019 sees the Leicester Phoenix Scooter Club celebrate its official 40th anniversary. But in fact, the Club can be traced as far back as 1976. Half a dozen young mods got together on their scooters, having randomly met at various locations around Leicester through their mutual love of the small wheeled Italian bikes. They started to frequent GT Scooters on Wharf Street in Leicester, where at the time the Leicester Lambretta Racing Team also took their scooters. One of the group found out that these scooterists all met at the Freeman’s Arms Pub, so all 6 went along hoping to meet other mods… What they found was unexpected – the race team, Norrie Kerr (a mod back in the day), Dave Webster and Chalky White amongst those riders. All of whom are scooter racing legends today.

Glenn Turner, Vice Chairman, tells us how the Leicester Phoenix Scooter Club evolved and where this thriving club is today…

The Freeman’s Arms became a regular meeting place and the racers got involved helping the young lads with any scooter issues.

Chalky had connections to the Market Harborough scooter scene, and so later in 1976, The Kettering & Leicester Phoenix Scooter Club was born. This newly formed alliance didn’t last long unfortunately, with the Harborough & Kettering lot breaking away to form the Borderline Allstars Scooter Club. From then onwards, the club became known as the Leicester Phoenix Scooter Club. Over time, the racing team separated from the younger scooter lads eventually concentrating on their scooter racing.

The release of the film, Quadrophenia, in 1979, brought a new influx of mods with people buying a scooter to be like their heroes in the film! As the club grew in numbers, some of the original members left to form a breakaway group, The Inner City Scooter Club, leaving Les Thorn to take control of running the now official Leicester Phoenix Scooter Club.

The Club continued to grow in the early 80’s with a new meeting place, the Pack Horse Pub in Leicester, later relocating to The Queen Victoria Pub where they remained for a number of years.

Now, fast forward to 1986. Having heard of this scooter club and where they met from a friend of a friend… Glenn, and a few others decided to go down and see what it was all about. Turning up at The Queen Victoria and seeing the twenty or so scooters parked outside on a spring evening was inspiration enough to want to join the club there and then!

Glenn tells us, “I remember at the time thinking, Les Thorn is almost 40 years old and still riding a Lambretta. What more inspiration could a 19-year-old scooter rider need?”

“I happily paid my membership fee and paid my first week’s subs to Les, The Chairman as he sat in the pub with a leather briefcase as members in turn went up to him to pay their weekly 50p subscriptions”, says Glenn.

The late 80’s saw an influx of new members a similar age to Glenn, as well as the more senior members who started to drop out of the scene. By the early-mid 90’s, the Club’s membership dropped from around 45-50 members to about 10 with those of similar ages starting families, getting mortgages and having to sell their beloved scooters to pay for the privilege. Glenn tells us, “the Club meetings on a Tuesday night would barely see half a dozen of us. Les Thorn continued to run the club as the chairman throughout these wilderness years.”

But, by the late 90s scooters started to become popular again and the Club started to thrive once more with new members breathing fresh ideas in to the club. They began to hold a few one-day events at their new meeting location, the Blackbird Pub in Leicester. With a band, raffle prizes and the like. 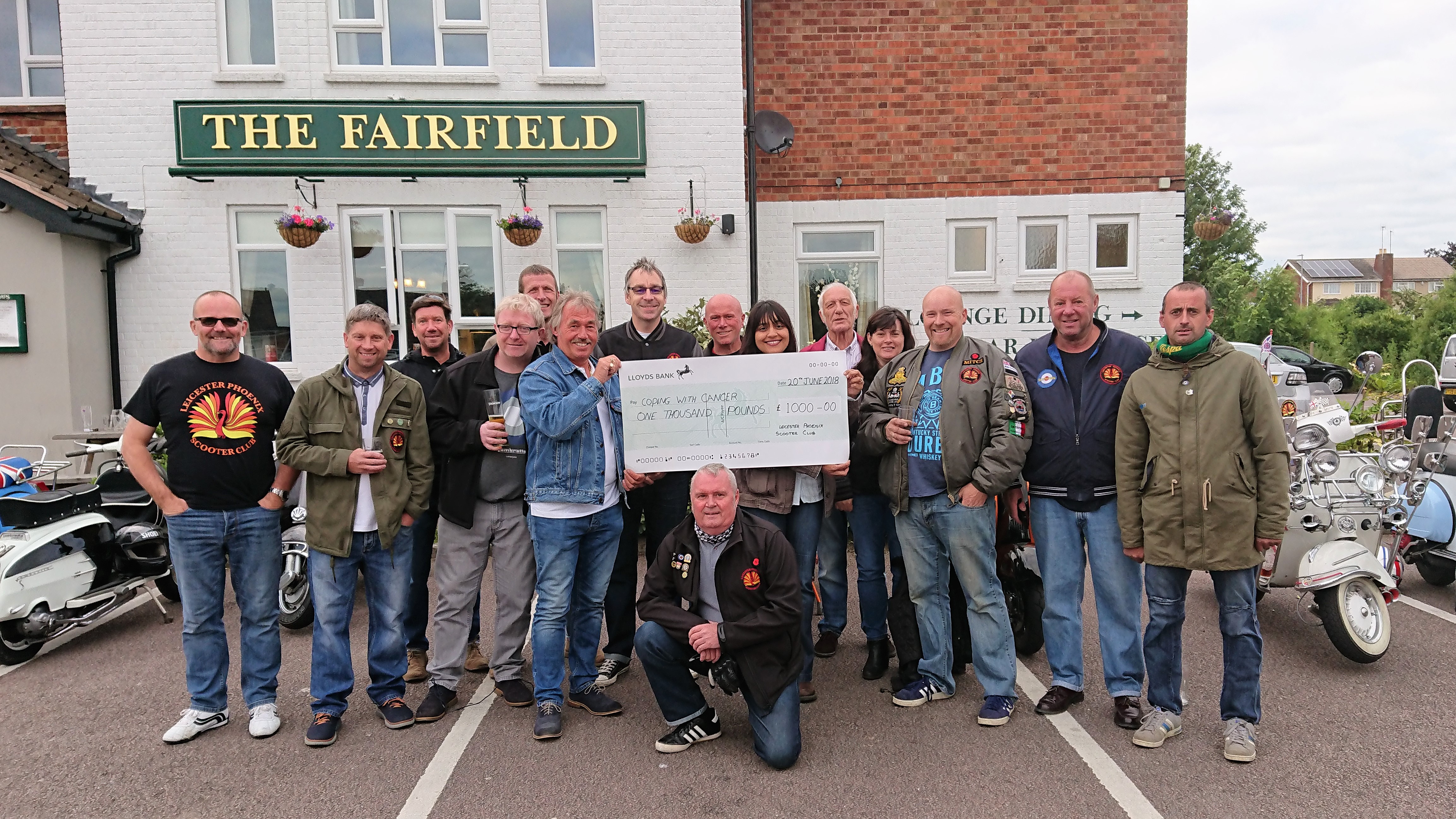 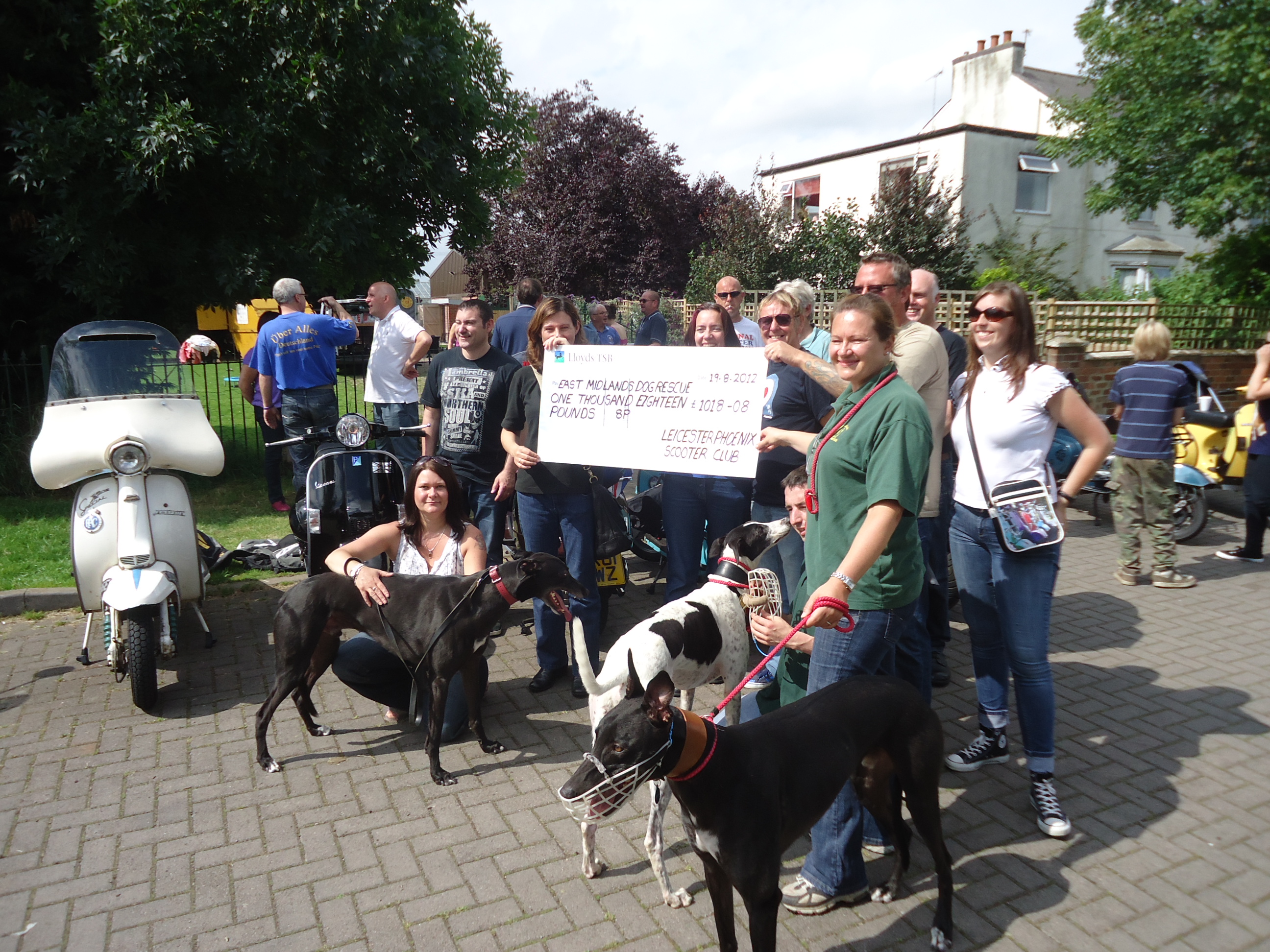 Following on from the success of these small one-day events, and with an injection of enthusiasm from a new member Aaron Mitchell, the first weekend local scooter rally was organised in May 2006 at Oadby Town Football Club in Leicestershire.

Two nights of camping, scooter memorabilia stalls, an autojumble, charity raffle, a scooter ride out, as well as two nights of music from bands and club member DJ’s playing late into the night… CL: Sounds brilliant!

Despite the low budget available for staging this event, it has now escalated in to what will be their 14th annual scooter rally, entitled: Phoenix Nights. Now held at Hinckley Rugby Club on the second weekend of May, it is still a weekend totally dedicated to enthusiasts of scooters – offering fun and games, music and entertainment, a rally ride out, as well as trade stalls, field games and two nights camping. It’s just now bigger and better than ever! Glenn tells us, “we attract guests from all over the country as well as local scooter clubs including, The Leicestershire Alliance Scooter Club, also neighbouring scooter clubs from Coventry, Birmingham, Northampton, Hinckley, Nuneaton, Tamworth, Burton Upon Trent. People ride from Essex, Dorset, Yorkshire and Lancashire to name but a few!”

The Club also host various smaller events, such as Christmas parties and charity one-nighters sometimes with a band and a disco, and invite other scooter enthusiasts to attend, donating the proceeds to our chosen charities. There is one coming up this month in fact – the 40th anniversary pre-season ‘DO’ on the 23rd March at the Club’s current meeting place, The Fairfield in South Wigston. CL: We hope you all have a great time!

The Club meets at The Fairfield now every Wednesday evening from around 7.30pm. Throughout the summer months they enjoy local ride outs to various pub locations usually within Leicestershire. During the winter months, still meeting weekly at The Fairfield. Sometimes in cars, just for a social gathering with a little banter and scooter related social chit chat between club members.

Glenn also tells us that there are various other events such as custom shows, national and local rallies that they try and attend as a Club. “We try to encourage members to ride together as a Club or joining with other clubs when we support these events. There is a very busy scootering social calendar locally, nationally as well as internationally. With a very busy social calendar some support the local events while some members like to attend the national events and rallies which are often greater distances.”

The Leicester Phoenix Scooter Club proudly chooses an annual charity to donate a proportion of the events proceeds to. So far to date, the Club has raised around £20,000 over the last 20 years towards various charities including, Loros, Teenage Cancer Trust, East Midlands Dog Rescue, Coping With Cancer, Once We Were Soldiers, Leicester Special Care Play Scheme, Guide dogs For The Blind, McMillan Nurses and many more. CL: That’s incredible work, well done to you all.

Today, Leicester Phoenix is a scooter club for all riders and owners of Lambretta, Vespa and modern auto scooters. There’s around 35 members of varying ages, a £5 joining fee to new members as well as £10 per year in annual subscriptions. The Club has a great online Facebook Group too with over 1,000 members where people can view or add posts, post adverts or photos or ask information.

Glenn and the team encourage all members to help by volunteering at Phoenix Nights, the Clubs annual rally. In return, the Club pays for all the members merchandise, T-Shirts, badges, patches, banners, corporate jackets. As well as paying for their annual Christmas party meal and for admission to various other rallies and events on the scootering calendar.

When Les Thorn, who is still a respected club member, decided to stand down as Chairman, as he neared his 70th birthday, Glenn was honoured to be elected as the new Chairman of the Club for a few years before handing the post over to Aaron Mitchell. Aaron now leads the Club with enthusiasm, with Glenn as Vice Chairman. In total there are six Committee members members fulfilling various key roles jointly helping to organise the general running of the Club. As well as Aaron and Glenn, Nick Morley is the Club Secretary, Julie Turner is Treasurer, Glenn North is Ride Outs Organiser and Richard Glover is General Assistant.

Leicester Phoenix Scooter Club welcome anyone who wishes to come and join them or to any other scooter clubs who like to meet up.

To find out more, visit their Facebook Group here. 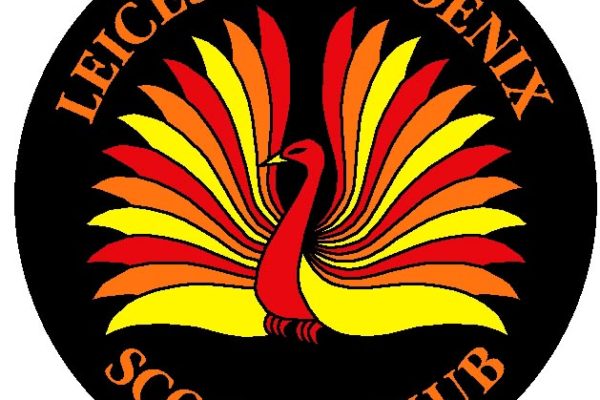 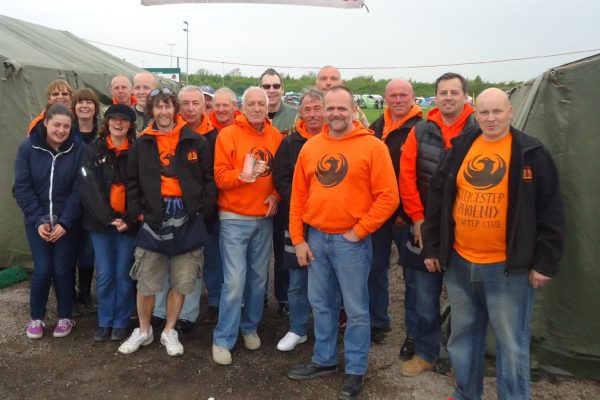 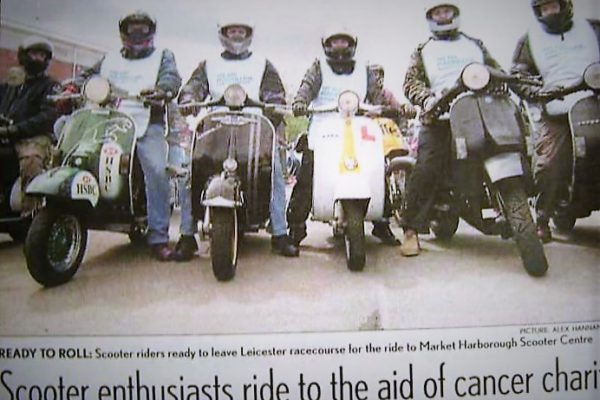 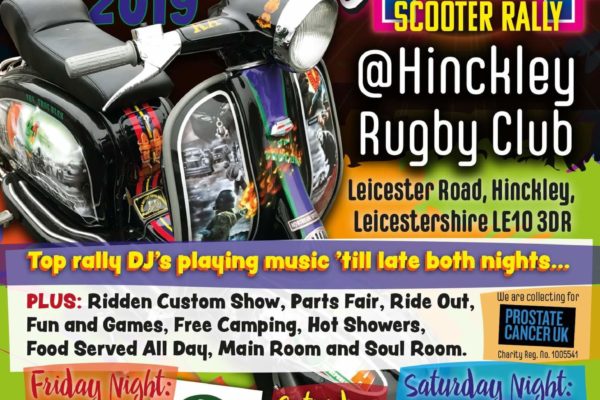