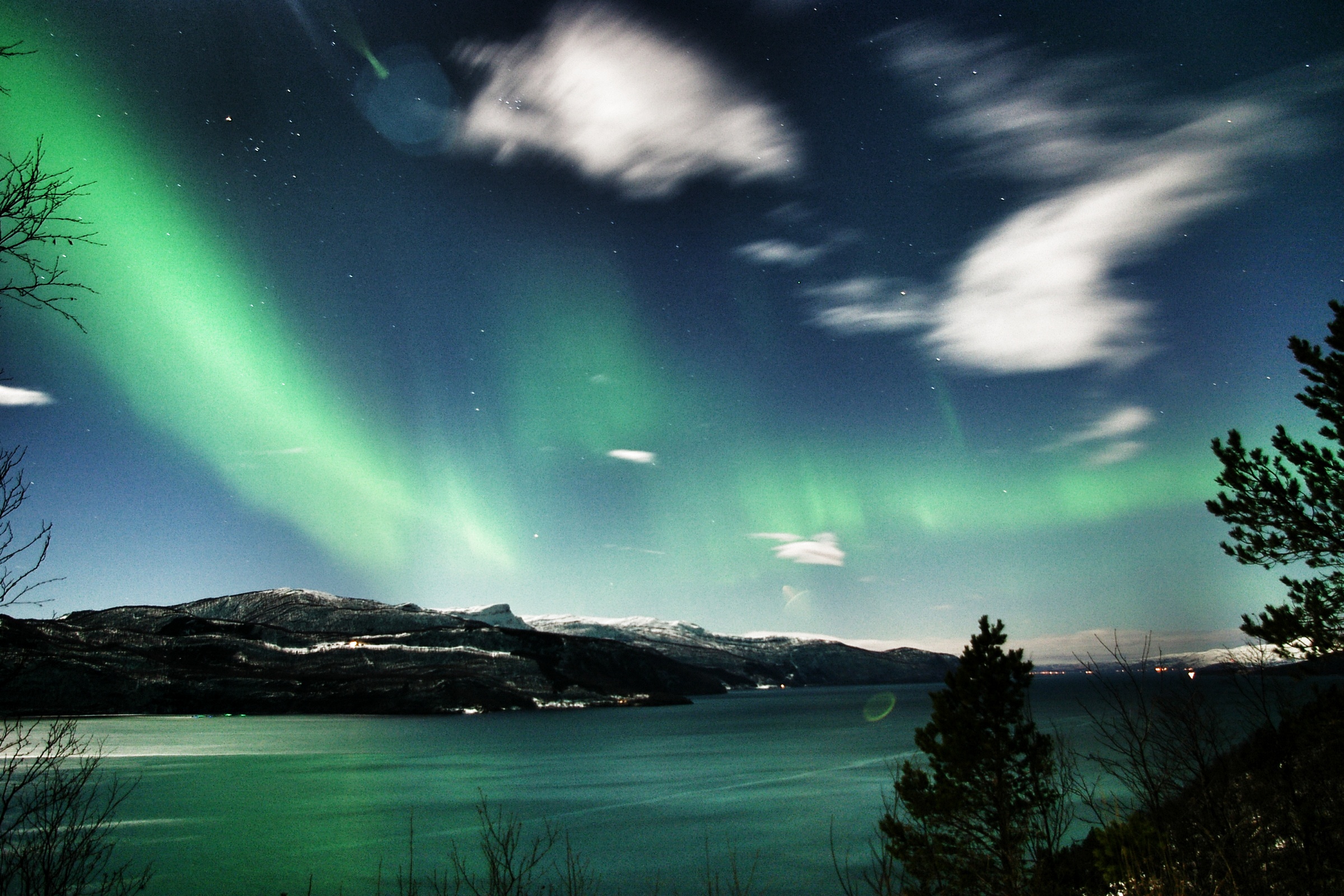 Is anyone else starting to get the feeling that we’re getting through this? That the obstacles which have deterred foreign road trips are gradually falling away, and the world is opening up? I certainly do. After several summers of not leaving the UK, it now feels like next summer will be different.  Those big drives we all love to undertake will be back on the menu.

But what if you simply can’t wait until next summer? Well that’s no problem, as with the application of a sense of adventure, this coming winter could still host your best driving adventure yet.  All it takes is the right car, a bit of preparation and an inspired plan. And when it comes to the ‘plan’ part of that equation, I’m here to help.

Here are 5 best drives to consider for the coming winter. 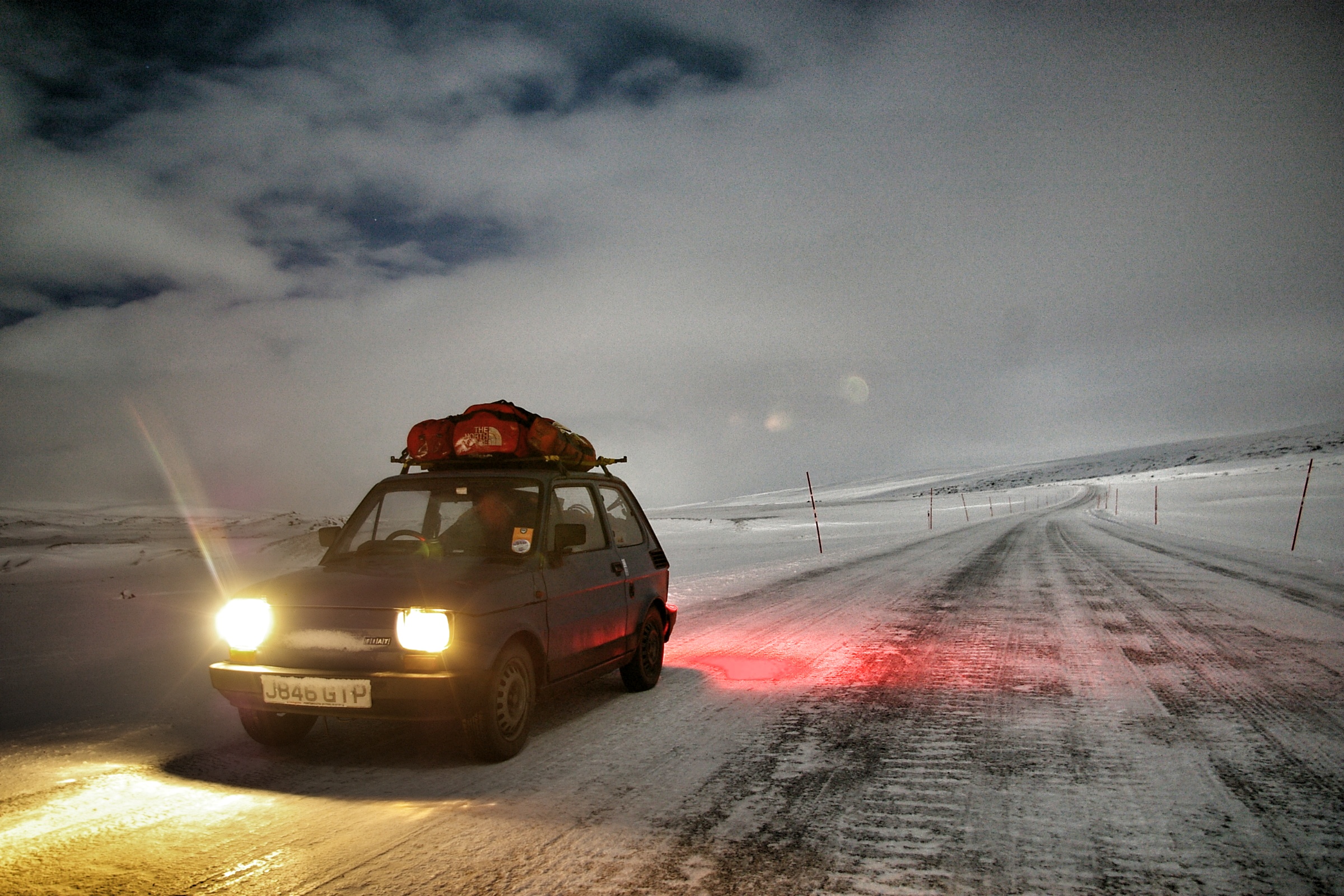 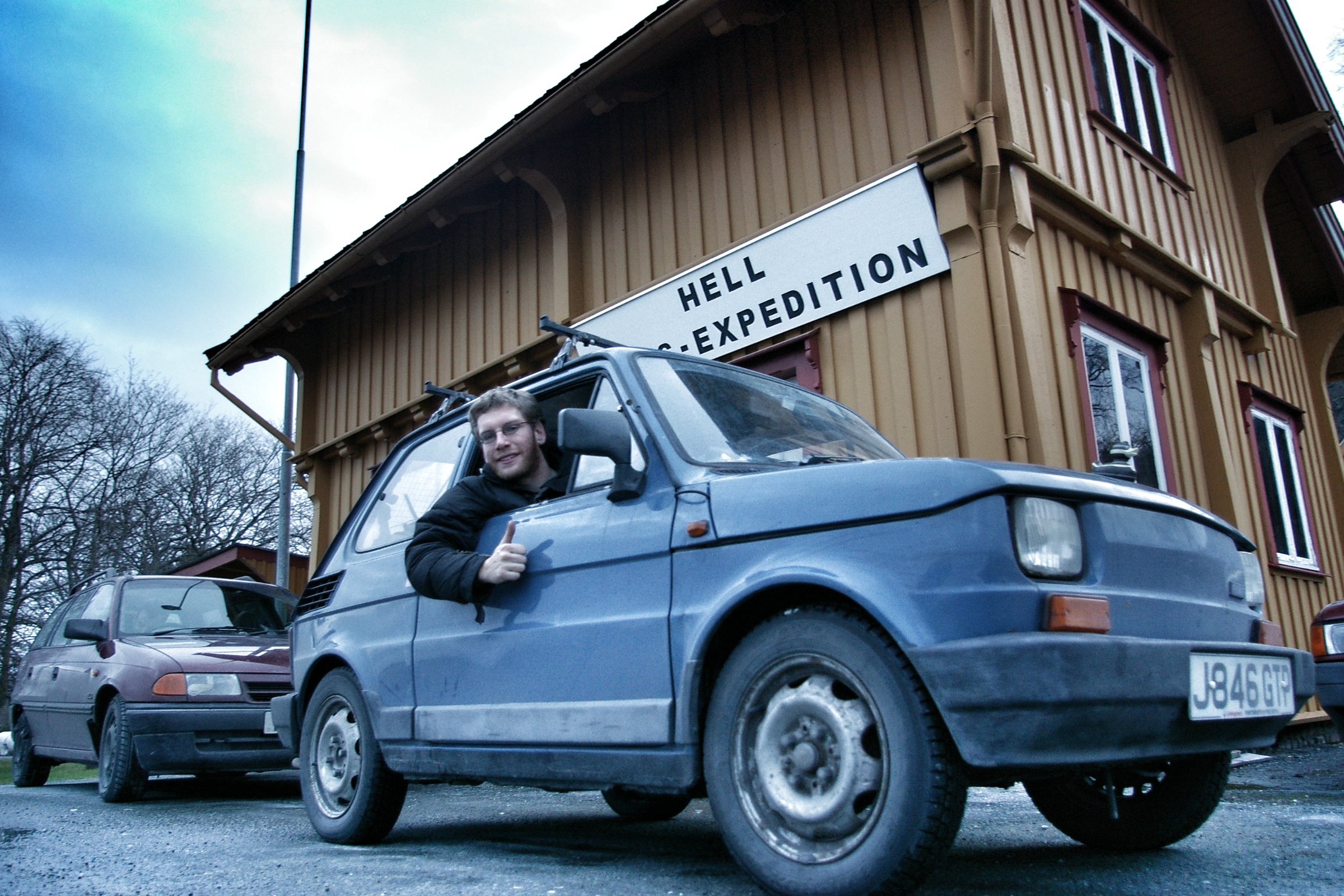 By the sole virtue of their name, some places just appeal to the child in you.  Hell – a small village near Trondheim, in Norway, is one of those places. I mean, who wouldn’t want to drive the road to Hell?  Particularly in the colder months, when Hell is frozen over. There’s nothing really there, except the station’s ‘Hell – Gods Expedition’ sign, and in winter you can expect to have a pretty frosty time of things. But forget all that negativity. Even without the satisfying irreverence of driving to Hell just for the sake of it, the Norwegian scenery alone more than justifies the journey, and the onward journey from Hell, up onto the Arctic Highway to the deep north, is one of the world’s great drives. And it’s at its best in the winter months, when snow blankets the mountains, and the northern lights drape themselves across the sky above.

We drove the road to Hell – and then onwards up the Arctic Highway to the Lofoten Islands – over a two-week period one New Year, racking up 4,000 miles in the process. Our vehicle of choice was a mighty 650cc Fiat 126 (because at the time, I considered it ‘the car from Hell’), and the total modifications required were the fitment of winter tyres on the car.  And that’s it.  Road conditions can be summed up as slippery but smooth, and even in the Fiat we had few issues with the driving conditions on the graded, icy road surfaces, an experience that mirrors Harry Metcalfe’s more recent trip up a wintery Arctic Highway in a Rolls Royce Silver Shadow, which can be found on YouTube. 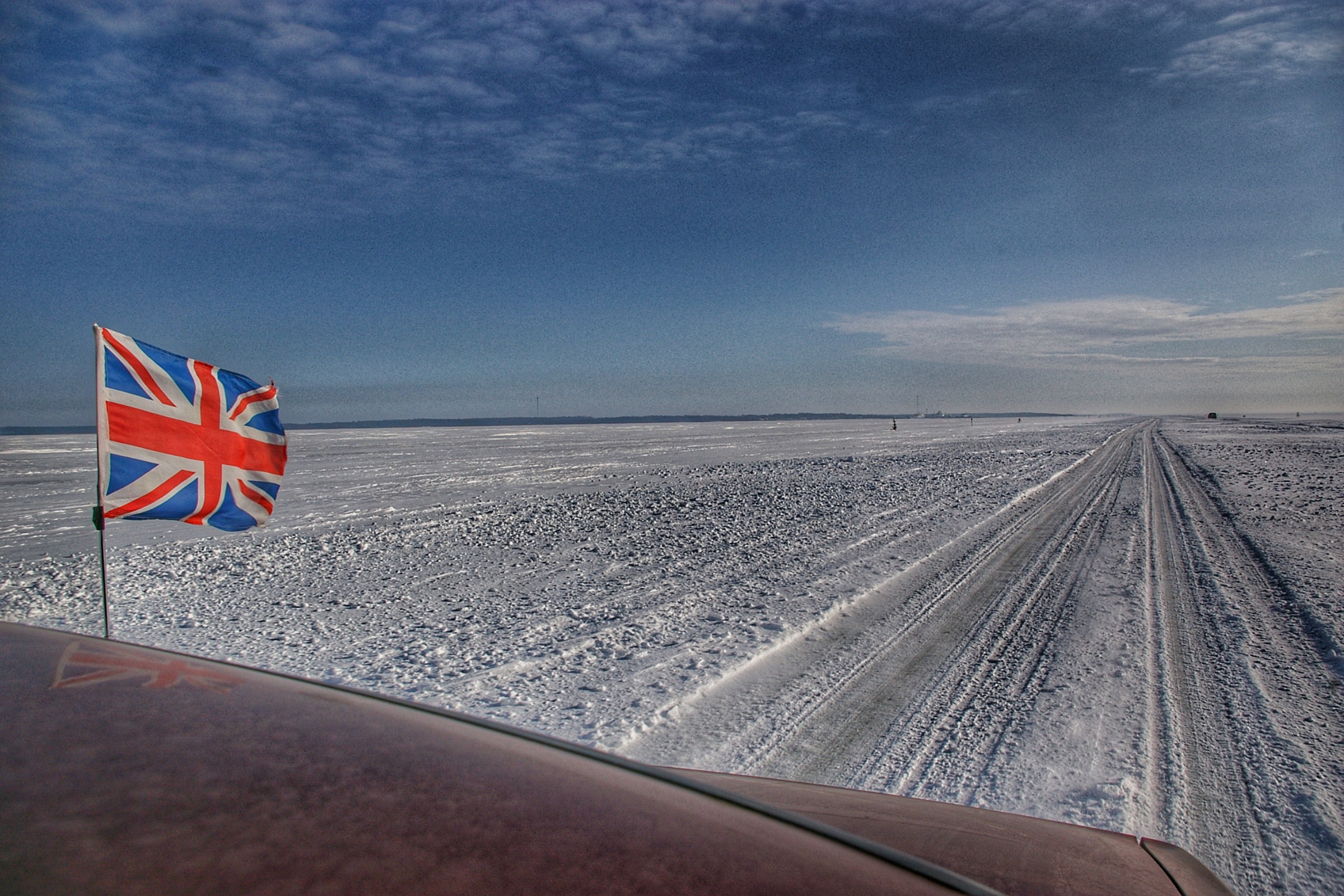 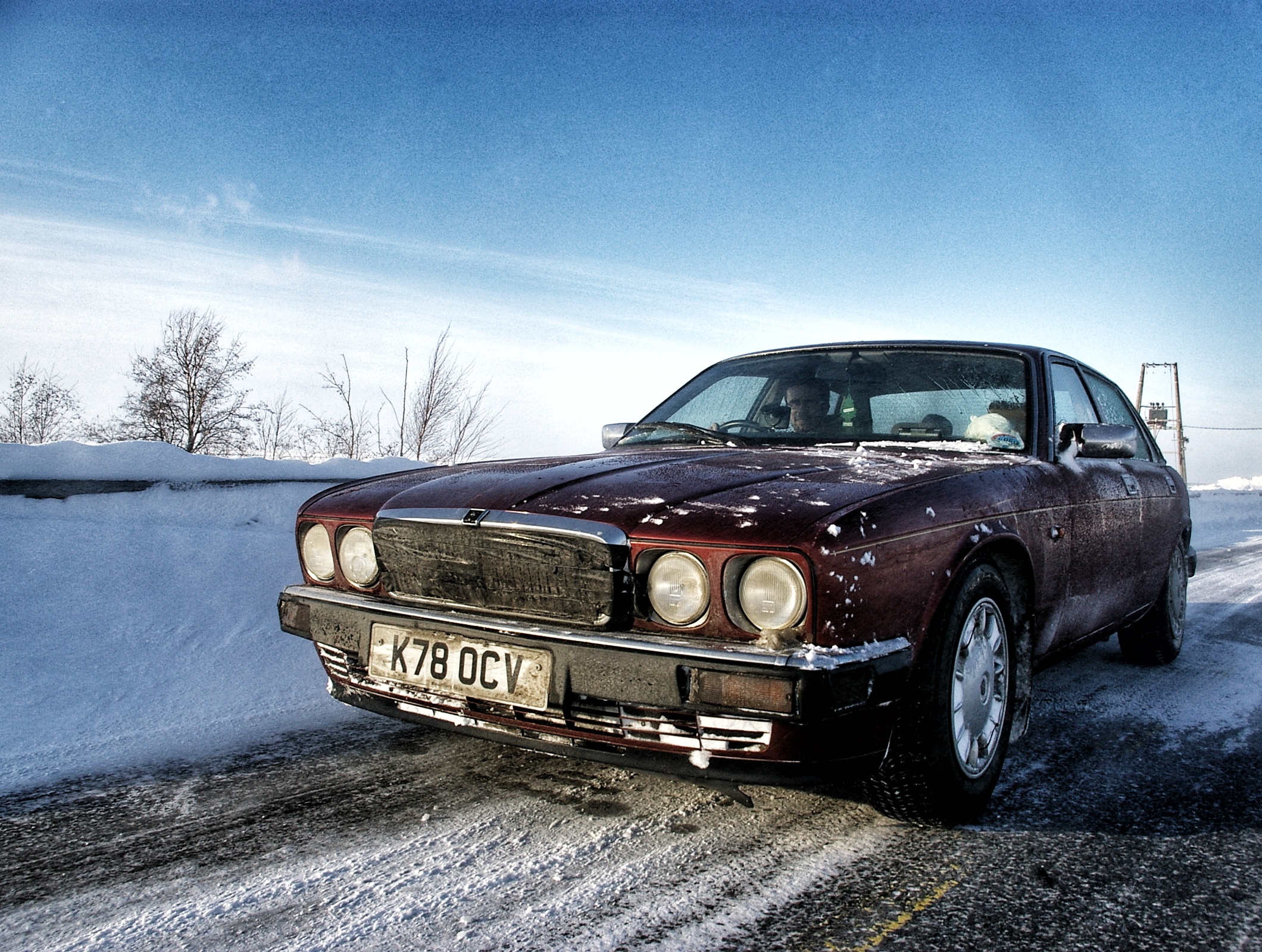 ‘A drive on the Baltic?’, I hear you say. And no, that’s not a typo. In the winter, when the temperatures plummet to thirty below zero, large areas of the Baltic Sea relinquish their liquid state and freeze. And where they freeze hard and fast enough, the industrious locals make ice roads across the frozen sea, out to islands offshore. One winter, we took an old Jaguar XJ6 on a 5,000 mile, two week lap of the Baltic to drive these roads.

The most dependable ice roads are those found in Estonia, which are maintained by the nation’s highways authority and are generally in condition from early February to the end of March. The sensation of driving them is a strange one – on the surface of it, it’s no different to driving any other icy road but even so, it’s impossible to escape the nagging realisation that there’s less than a foot of ice separating you and your car from the Baltic Sea. It’s a unique driving experience, for sure, and that’s what makes a road trip around the Baltic with the goal of ticking off this esoteric motoring experience a fine basis for a driving holiday. Tempted? Like the Arctic Highway, once you’ve got some winter tyres on your car, you’ll be good to go. 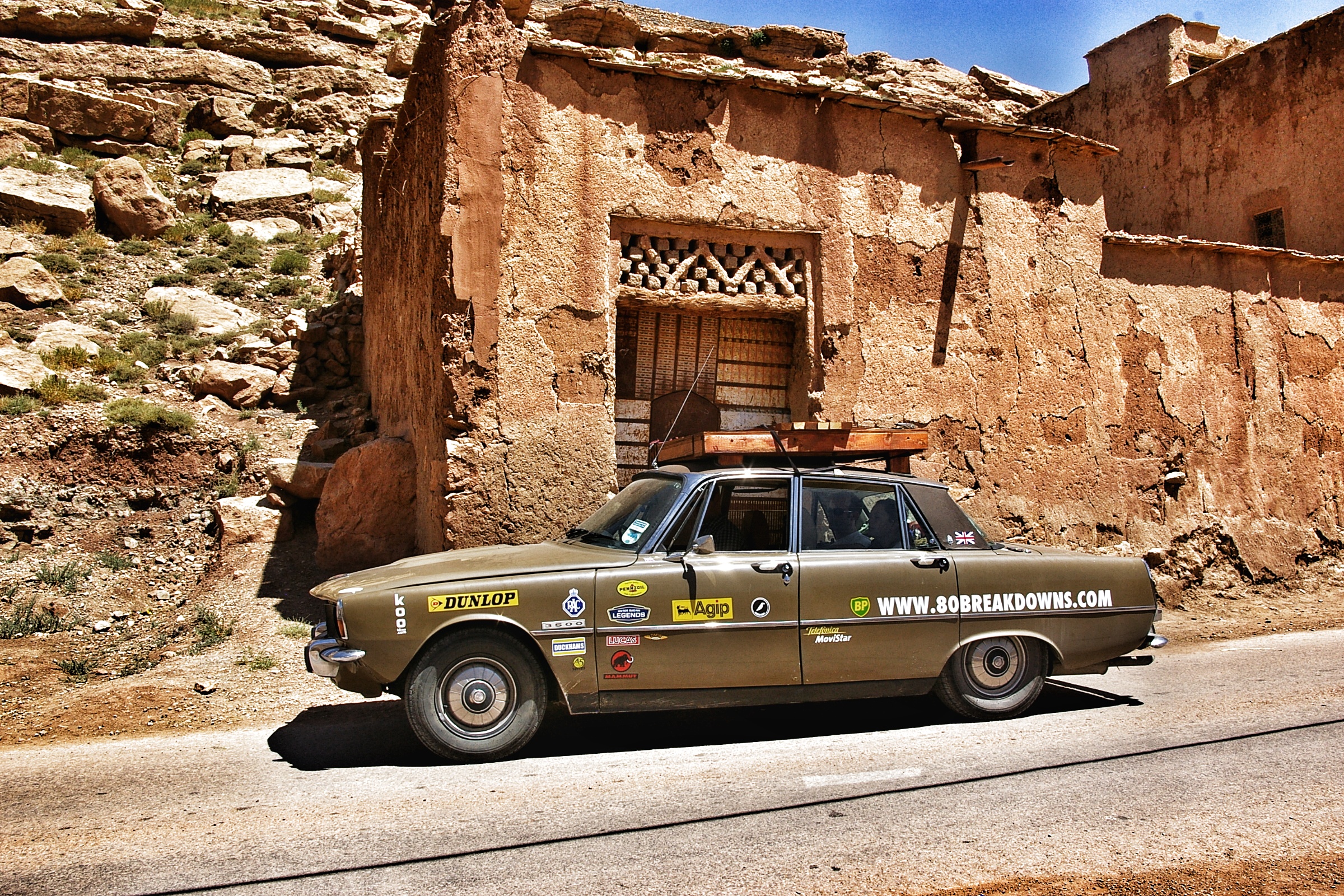 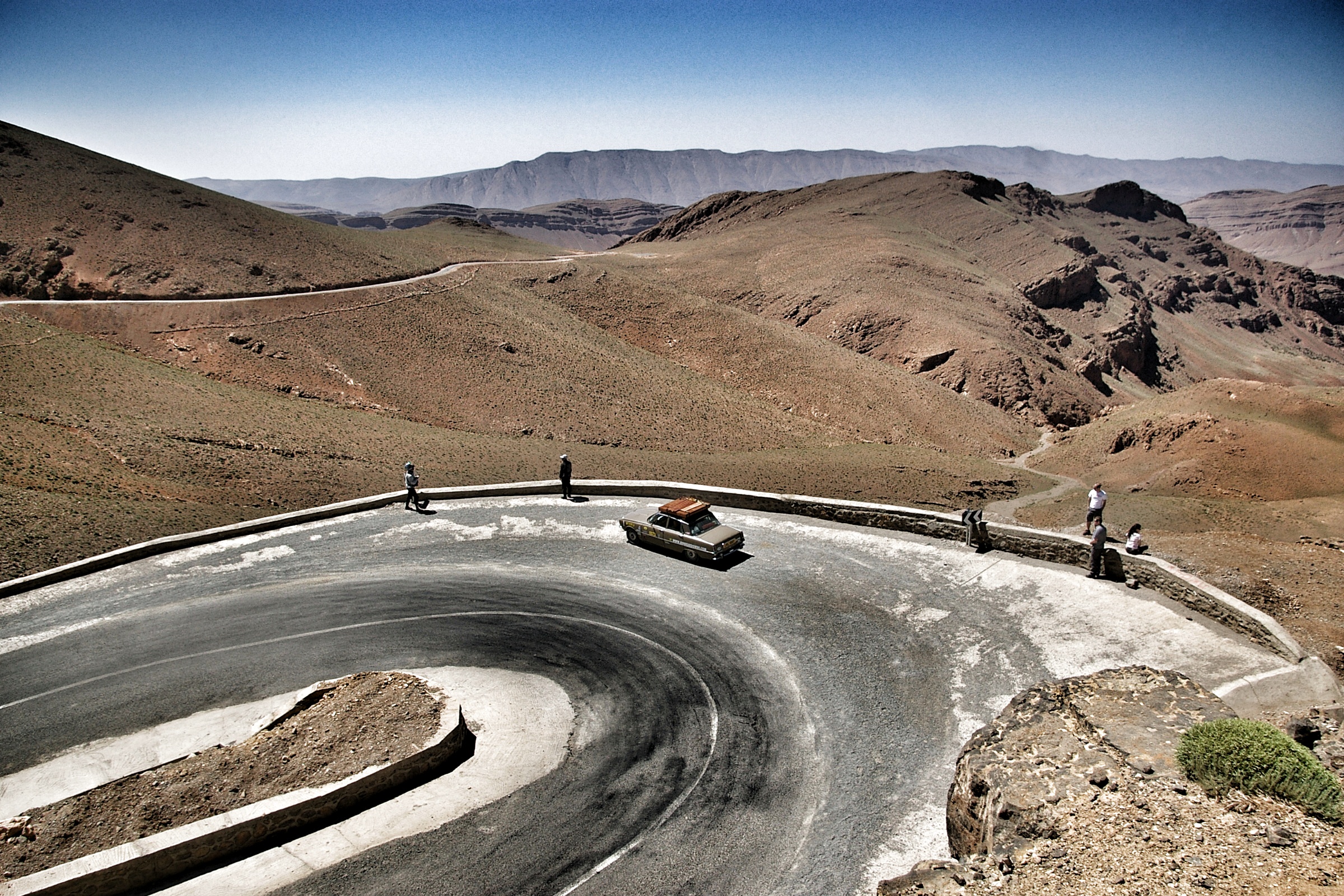 I know, I know, not everyone wants to spend their winter holidays dodging snowballs in the chillier parts of Europe. After all, there’s a reason the south of Spain is so popular with Brits every winter.  But, if you fancy a real adventure, I’d implore you to look just a bit further, across the Straits of Gibraltar, to Africa.  Or to be exact, Morocco.

I’ll admit to never having driven there in the winter, though I’ve undertaken this drive in the summer, when we took a Rover P6 down to Morocco, and then across the High Atlas Mountains to the fringes of the Sahara.  But in summer, the temperatures are ridiculous and the scenery arid and parched.  No, the cooler temperatures of winter, when Marrakesh’s mosques rise up against a backdrop of snowclad mountains, represent the best time to go. And don’t be put off by the red tape of getting a car into Africa. We took the ferry to the Spanish enclave of Ceuta before crossing into Morocco, and it was one of the easiest African border crossings we’ve ever experienced. For more information on driving to Morocco, get yourself a copy of ‘Morocco Overland’, by Chris Scott, which covers every aspect of planning a self-driving trip to Morocco. 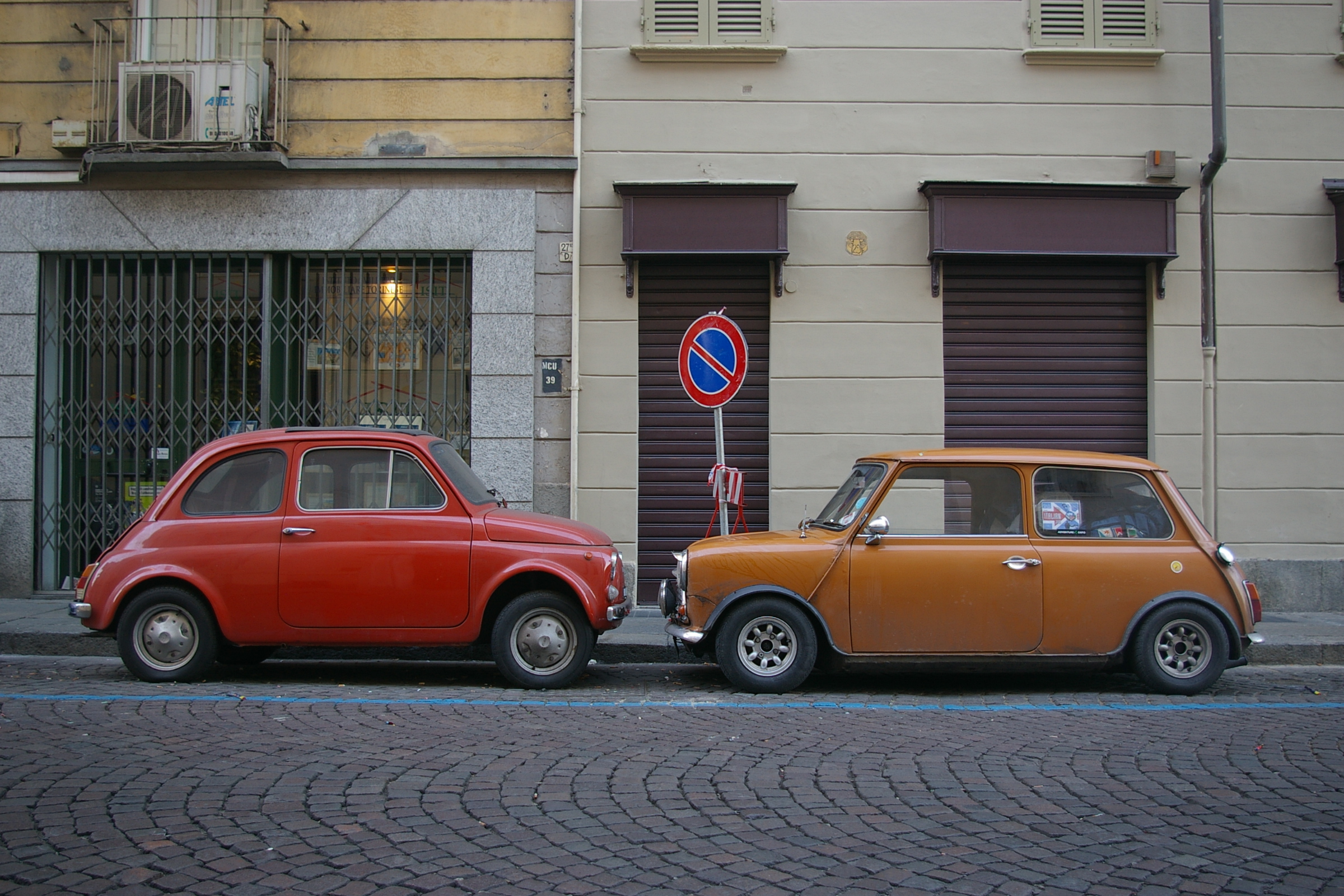 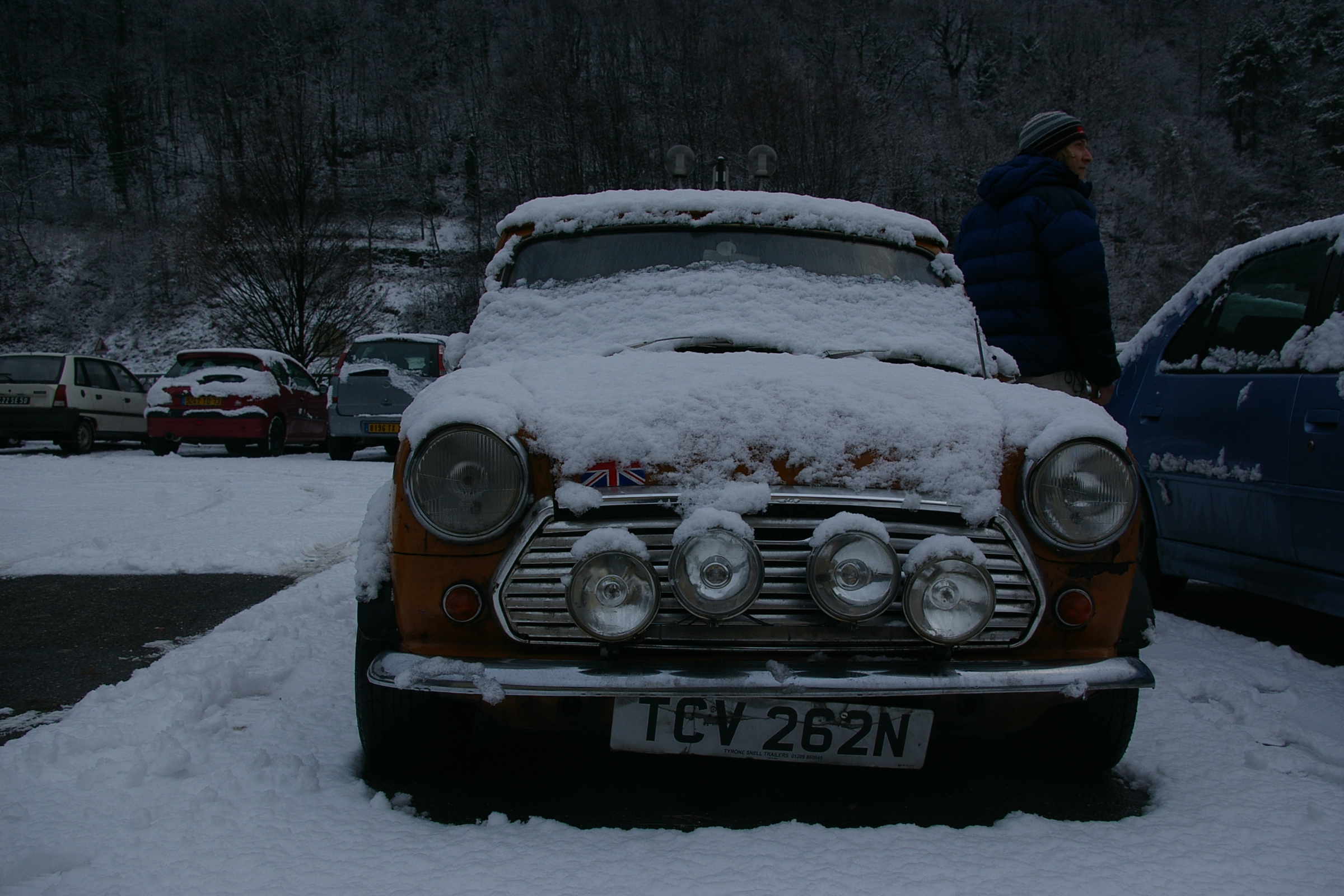 This is one for the Mini aficionados. If you have a classic Mini, what better way to celebrate New Year by taking it down to Turin to see in the New Year, self preservation society style?  Over a decade ago, I did exactly this, and a fine adventure it was too. En-route, we stopped off in the Alps, and on the way back we looped around Switzerland, taking in a deserted, low-season Venice, and the pretty Slovenian town of Bled. But, where you plan to visit on your way to and from Turin is up to you – the whole of Central Europe is at your disposal, meaning you can drop by wherever your whims take you.

Just make sure your halfway spot is a pizzeria in Turin, on New Year’s Eve, with your classic car parked outside. That’s where we ended up, following a blat down from England and across the Alps, and a more memorable New Year’s Eve is difficult to imagine. 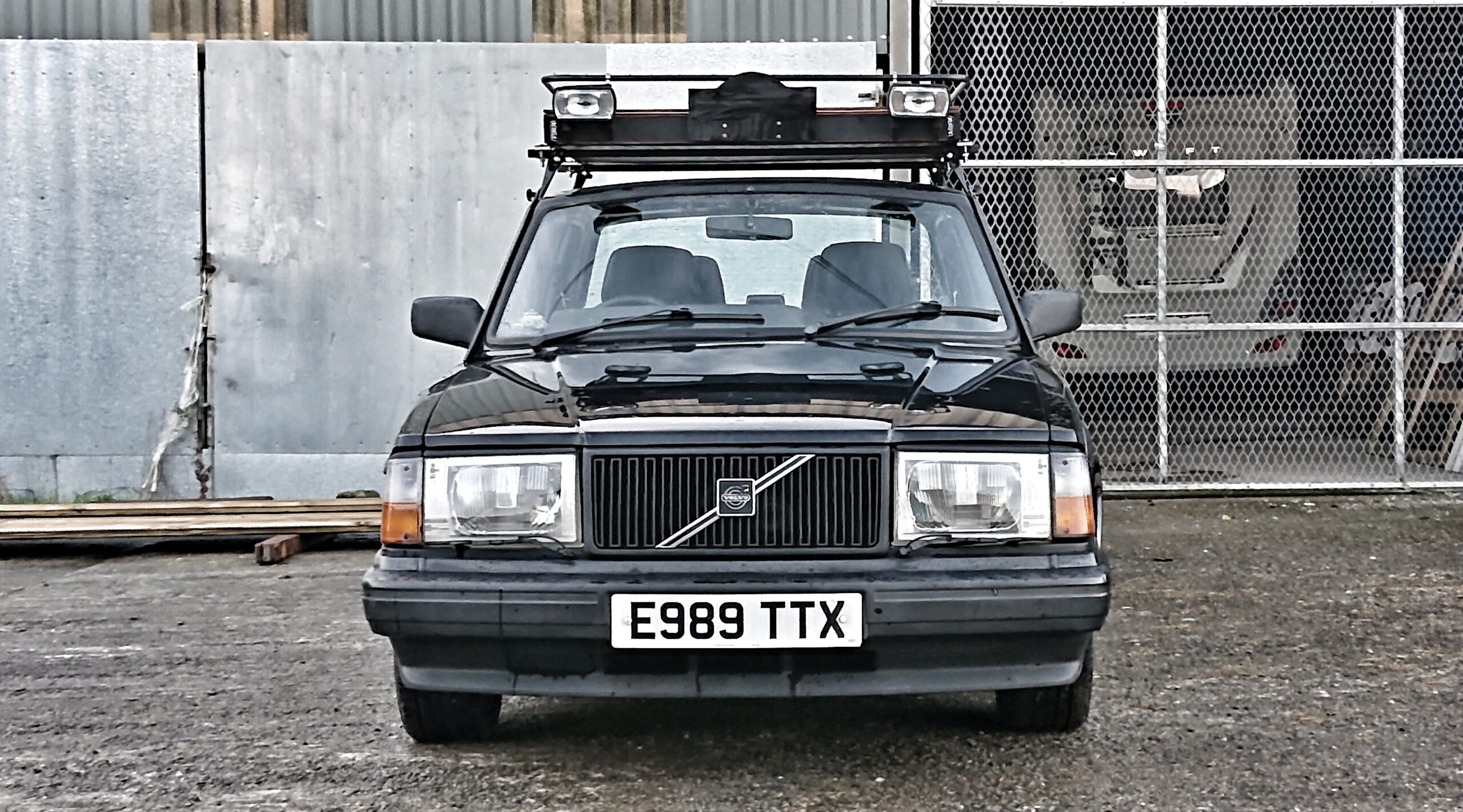 While I’ve already undertaken the previous four drives, I figured I should have something on this list which I still aspire to myself. So, in a spot of indulgence as someone who daily-drives a Volvo 240, I present the ABBA Run – a potential homecoming drive for anyone with a classic Saab or Volvo. While the initial route to Sweden is similar to the Hell trip given above, once you cross over from Denmark the plans diverge. Instead of the craggy mountains of Arctic Norway, there’s the endless forests and powder snow of the Swedish backcountry. Instead of the village of Hell, there are potential visits to the Volvo and Saab museums, the metropolis of Stockholm, and more Ikeas than you can shake a stick at. And for your ultimate objective, Lapland is packed with potential places in which to pass a few days. A glance over at AirBnB reveals any number of remote lakeside lodges available for hire in the Swedish wilderness, or maybe an ice hotel is more your cup of tea? Whichever you choose, as you watch the auroras shimmer above your classic as it sits among the snow banks, you’ll be glad you made the trip.

So, there are five drives which could brighten up the winter months no end, but which would you choose? Whichever it is, remember that as ClassicLine includes European breakdown cover with all their policies, we’ll have your back when you hit the road. 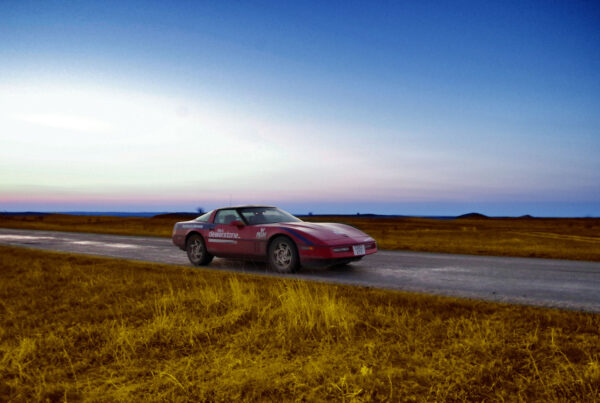 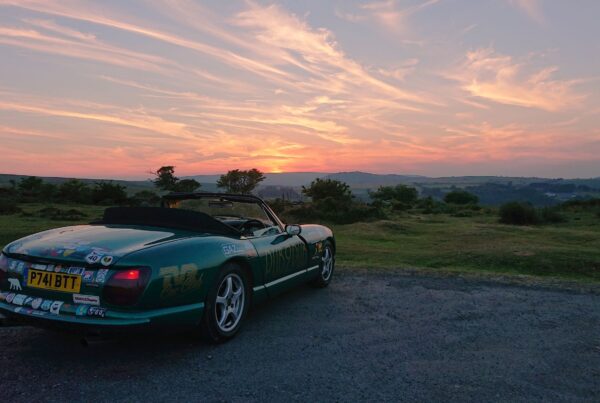 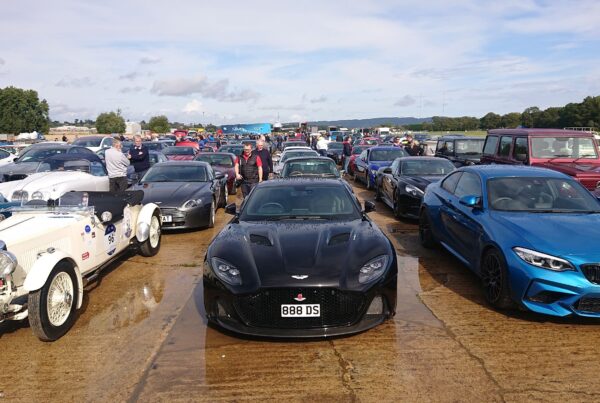